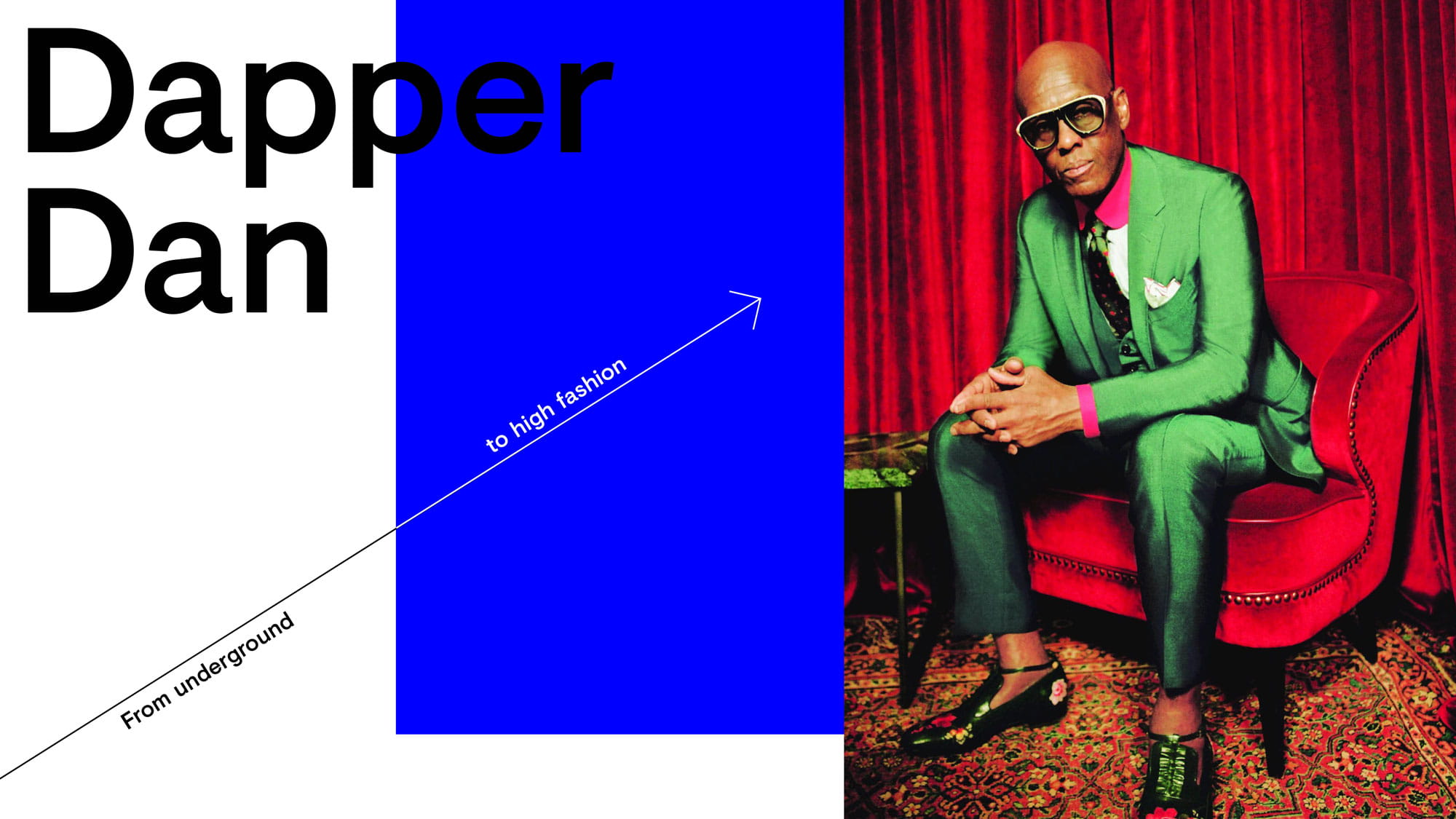 A native of Harlem, where he runs his boutique on Lenox Avenue, right beside the biggest names in fashion, Dapper Dan is an icon who transcends trends and eras. From LL Cool J to Missy Elliott, not to mention Mike Tyson and Billie Eilish, his brand is well-known beyond the borders of New York, even if Dapper Dan is still the accessible and authentic guy next door.

The famous designer spoke to our artisans in his laidback style. Dapper Dan spoke about his career through the prism of our creative credo and its pillars.

Context: 1980s Harlem
At Sid Lee, we believe that to make a mark and endure, an idea or vision has to be tied to the current context in which the creator operates. It must be anchored in reality. Dapper Dan’s youth spent in a multicultural Harlem prepared him to embrace the fusion of different genres. The context of the ‘80s and its strong economy allowed him to spread his wings.

“Whatever happened in Harlem didn't happen anywhere else in the world and will never happen again. There were poor White people, poor Jews, poor Blacks, and Hispanics all together in one pack, interacting together. I didn't understand how beautiful that was, and how big of an effect that had on me until I started going to other places where everybody was divided. Then came the ‘80s. It was a time when there was a huge amount of underground currency and it enabled me to be able to create a culture or aspect of culture that could take off.”

Art factor: Create to elevate
For Dapper Dan, the act of creating explicitly entails a will to change the world. His view of creating isn’t that far from ours, which is to create what matters.

“You should always use your art, or your talent or your aesthetic talent, as something to uplift humanity.”

And he believes that inspiration is everywhere. Truly creative people are able to draw inspiration from what’s around them and apply that to their vision.

“You have to pay attention to the culture, you know, tap into the culture. Get outside of yourself. A lot of young designers are so locked into themselves. You are not the world — you are part of the world asking the world to be part of you.”

An idea or a piece that influences culture
Creatives influence fashion and create culture. They act as the conveyor belt. In talking about this, Dapper Dan remembered his reaction to the rise of Gangsta Rap in the late 1980s; he didn’t like this movement in Hip Hop at first, but he influenced it by transforming their dress code.

“When people used to come to me and asked if I could make some kind of gang outfit, I refused. I stayed true to who and where I was, and I stayed relevant at the same time. Each time a new trend develops, I have to see: how can I modify it to be true to what I stand for, while at the same time remaining relevant? That’s though. But I'm here to translate culture, to help shape it, not to dictate it.”

Break a rule: The color code
When it comes to disrupting and upsetting current rules, Dapper Dan had much to say. His entire career can be seen as a sign of transgression. He isn’t nicknamed the “Fashion Outlaw” for nothing.

“If you talk about ‘breaking in’ the biggest thing that I did, I broke the color code.

Desired impact
Now in his 7th decade of life, Dapper Dan is still motivated by what he sees around his neighborhood, even though his notoriety and his message have now expanded beyond his native Harlem, where he still commutes every day between his home and his boutique. He’s become famous, and he’s created a powerful and significant brand over three decades, all while breaking the rules of the fashion industry. He started from the bottom and did something phenomenal while staying relevant.

But Dap’s success lies in his authenticity and his outright refusal to ignore his instincts and who he is: a guy from Harlem. The designer continues to believe that going around the neighborhood gives him inspiration and helps him keep a finger on the pulse of the community.

“I take buses, I take trains, even if it’s only for a few blocks. The other day a young guy on the train said to me, ‘Hey Dapper Dan, I never thought I’d see you here.’ I said, “Yeah, you know why I do it? Because if I wasn't on the train, I wouldn't see you.”

Sid Presents: Dapper Dan was held on February 23. The conference was presented to Sid Lee artisans. Michelle Bekas and Annika Ramchandani were the hosts. We thank them and Dapper Dan for their generosity and for this inspiring talk.

All the Mad Love for women’s sport
We want to offer content that truly matters to you. By browsing this site, you accept the general terms of use and the use of cookies. Learn more