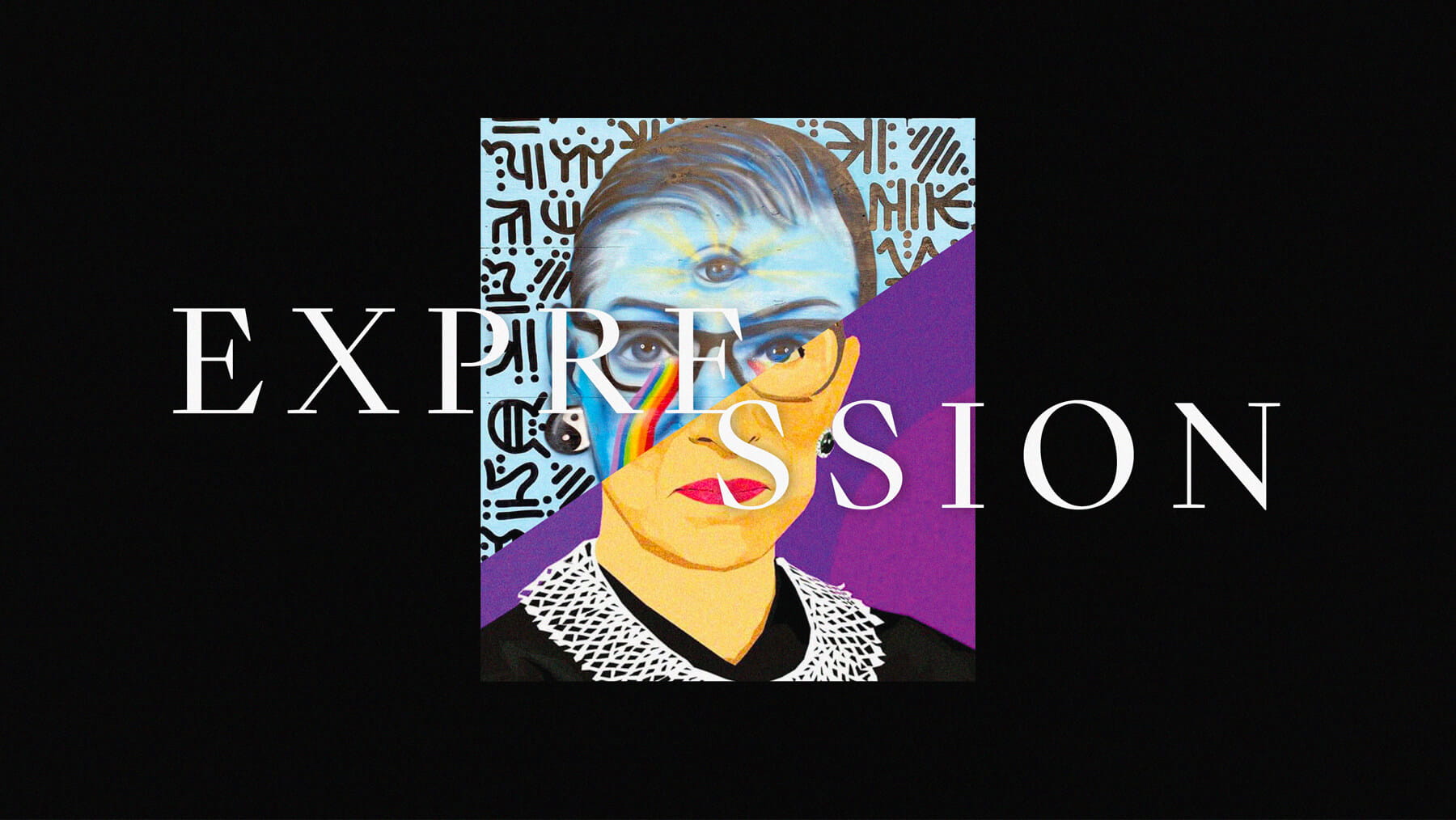 Watching Jules Muck work, she is zen-like: focused, calm, deliberate. She starts with a simple black outline, rough at first, hiding the expertise of the artist known on the streets from LA to NYC to London as Muck Rock. First, a rough sketch of the hair, then ears, maybe? A jawline emerges, then the giveaway, the glasses; it’s Ruth Bader Ginsberg staring straight ahead. As she fills in the details of the face, we see the Justice, young, fierce, alive…

Monica Ahanonu’s process, when creating her portrait of the late Justice, is much different. A digital artist in high demand with clients including McDonald’s, Adidas, and Time Magazine, she starts with shapes. The silhouette comes first, then she adds layers and layers, bringing dimension to her face and her clothing. Then, she plays with color, bringing in her signature mix of realistic portraiture and vibrant blocks of color and patterns. The result is another beautiful celebration of a much-loved Justice at the center of the current presidential election.

The desire to quickly fill Justice Ginsberg’s vacant seat before the election, is one of many divisive issues, leading to perhaps, one of the most contentious presidential contests in recent memory. Artists from all backgrounds have taken to the streets, to Instagram and other platforms to let their voices be heard. We spoke with Jules Muck, a graffiti artist and Monica Ahanonu, a freelance illustrator to get their thoughts on the art world within the context of the current political milieu.

Jules has been bombing walls all over the world since the late ‘90s. Her subject matter draws heavily from pop culture. But her inspiration comes from a much wider palette. “I’m a collaborator. I usually take cues from the people that are in the area I’m in. And, whether they hire me or we’re collaborating… it’s usually a group effort.” She finds she can’t ignore what’s going on in the political sphere. “When I was younger, I used to get more heavily involved,” bombing political signs of the parties she didn’t agree with. Her approach has changed since then.

According to Jules, just being a public artist is a political act. And, that act itself is often more important than the subject matter of her work. “Public art is not really something that the elite can keep for themselves. It’s for everybody. So, it doesn’t really matter what I paint. If I go around painting flowers, it’s still a huge political piece. If I’m giving art to people, if I’m putting things out there for people to have, then I’m doing my part.”

She feels empowered by her work, “To be a female who is not afraid to be seen and heard and to take up space is also a pretty important political statement. I can drive into any place, anywhere, I can get out of my car, I can unpack my ladder and my paint, and I can put my [art] onto a public canvas by myself.”

As a digital artist, Monica Ahanonu has a much different take on her art and its place in the political sphere. She hasn’t been working as long as Jules but has racked up an impressive roster of clients since she graduated from USC’s School of Cinematic Arts in 2013. She describes her work as energetic and counts fashion as her biggest influence. “I get a lot of inspiration from fashion, fashion shows, the different characters that are put together and sent down the runway, the different silhouettes, the different outfit combinations, all the crazy patterns mixing together.”

Monica also takes her inspiration from the streets of LA and people-watching. So, it’s no surprise that politics have entered her art as well. “I’ve been more vocal about the issues that are happening. I’m realizing that a lot of the people that I’m surrounded by may not be as aware of all the issues surrounding Black Lives Matter.” So, she uses her powerful platform to inform. She recently did a portrait for Biden and Harris and encouraged her followers to vote.

As a public artist, Jules sometimes takes action to correct images that have been hijacked. “I think that it’s really an act of violence at this point to cross out Black Lives Matter. I think it’s derogatory. I think it’s hurtful and it’s violent to do that. And it’s violent to say all lives matter. Anyone who’s doing that is bullying and oppressive.

Just today we were driving through some Indiana town, and we found a George Floyd painting, not by me. Some artist did a board and they wrote Black Lives Matter on it. And some jerk had gone up there on this person’s artwork and crossed out black and wrote all. So, we pulled over and we fixed it, repaired it to what the artist’s intention was.”

As the presidential election gets closer, and the campaigns saturate markets with messaging, artists will use every means necessary to make their voices heard over the clatter. And, they’re using emerging platforms to do it. Monica feels optimistic about emerging platforms, “Seeing what people create on TikTok is mind-blowing, the wide range of what people can create on that platform and the ways they use it.” It gives hope that self-expression in the digital age, even in an election year, is alive and well.

See more work from these amazing artists and follow them on their platforms here:

Build the Vote: engaging future and first-time voters in Minecraft
We want to offer content that truly matters to you. By browsing this site, you accept the general terms of use and the use of Cookies. Learn more