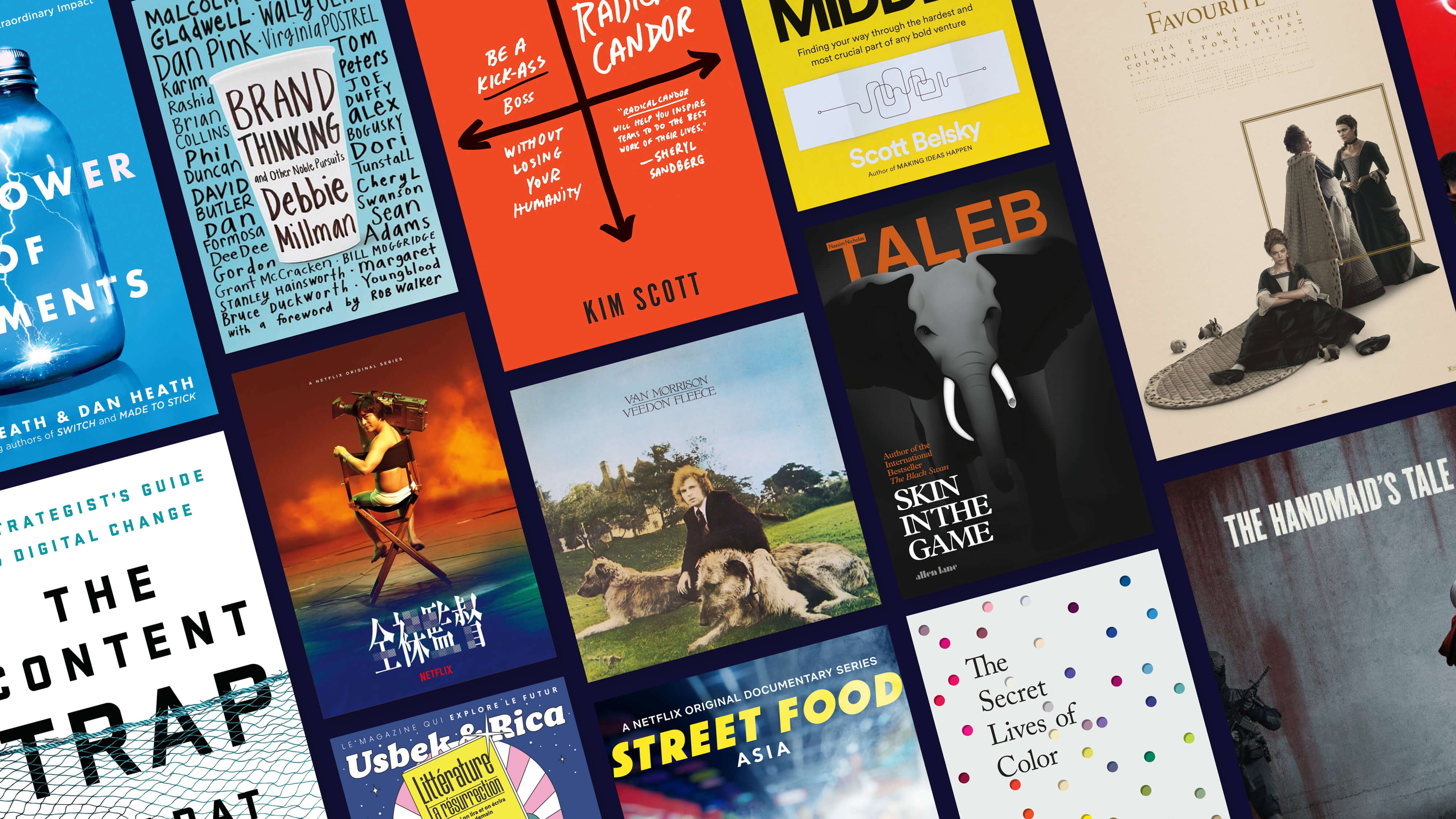 The Favourite
I absolutely loved The Favourite. It paints a very different picture of Queen Ann in the 18th century. And it is a wry take on life at a time when duck-racing and pineapple-eating were all the rage!

The Content Trap
A business book I'm currently reading is The Content Trap. It's a provocative look at digital disruption and asks us to understand the importance of both content and the network effect – the fuel that is driving growth and change in our world today. The fuel matters just as a much as the spark.

Street Food
Street Food on Netflix is the next series on my list. It seems to offer a nice angle on the relationship between food and culture. As a foodie who lived in Europe, Asia and North America, I have been able to witness the impact of food on local cultures and I am really fascinated with this interesting relationship.

Why Co-Leadership Is The New Strategy For Company Growth
There’s a Forbes article about co-leadership that really hit home with me. As it has been nearly a year since I started co-leading the strategy group at Sid Lee Montreal, it’s really a subject I related to. Throughout the organization, we started multiple co-leading duos and it really seems to be paying off. Co-leadership has helped us bring a more diverse perspective to a single role, feel more supported in high-pressure jobs, and be more present for our teams. It’s a fresh and different way to handle team management.

Van Morrison, Hugh Masekela & Mandolin Orange
I'm a huge music fan, and for some reason my obsession comes out in full force during the summer. I've been listening to a lot of old albums from well-known singer-songwriters, but mostly their lesser-known work. I've been in love with Van Morrison's Veedon Fleece; it's the perfect album to put on Saturday mornings, preferably with a stack of newspapers and a full pot of coffee! Hugh Masekela is another one I've discovered – he’s the father of South African jazz. His album Rekpete is the perfect pick for hanging in the park or backyard on the sunny afternoon with friends, family and a cooler of your favourite ice-cold beverages. The third one is the album Tides of a Teardrop by Mandolin Orange. A chef and friend of mine who was helping me with a recipe made me put it on, and it instantly hit me. It's the perfect album for watching the sunset with loved ones and simply letting the stresses of the day wash over you. If you happen to have a glass of natural wine nearby, that wouldn't hurt either… I think I have a thing for pairing music with liquids.

Monocle — Quality of Life Survey: Top 25 Cities (Summer Edition)
I read Monocle year-round. I admire their global citizen lens and how they bridge their recommendations to local tactics. Their summer edition is no exception, and their list of the top 25 cities to live in takes me back to 12 years ago when I first got into Monocle. Since then, I do a deep dive into their design critic’s mindset to get inspired during the hot summer days. The magazine is built to let the readers have multi-layered stories. It’s definitely a plus when you’re sitting by the lake with a bourbon lemonade in your hand, and allow your mind to drift off.

The Messy Middle: Finding Your Way Through the Hardest and Most Crucial Part of Any Bold Venture
I pre-ordered the book The Messy Middle to make sure I read it as fast as possible. I’ve been following Scott Belsky from the early days of Behance and the 99U platform. Even if Scott is not a creative per se, he does understand how a creative’s brain works. Therefore, he can capture and use the right words to explain creativity. Unfortunately, it’s mid-July, and I have not yet gotten to read the last pages of the book. If you are looking for ideas to help your creative team better understand themselves and get more great work out there, this is one of those reads.

Dissect – A Serialized Music Podcast
Cole Cuchna’s podcast Dissect explores a few of the most iconic hip-hop albums of the recent past, from their musical influences to the meaning of each lyric. Even though I listened to The Miseducation of Lauryn Hill hundreds of times when I was a teenager, it was like listening to it for the first time through the lens of the episodes about that album. This podcast is for people who love music, or for anyone who just wants to (re)discover this classic album.

Radical Candor – Be a Kick-Ass Boss Without Losing Your Humanity
Radical Candor by Kim Scott is a book that I recommend to every manager. I’m a people person: the more I interact with people, talk to them and get to know them, the happier I am. Sometimes it’s hard to be a fair and objective manager when you’re so close to your teams… Where do you draw the line? This book demonstrates in an excellent way how you can do that and why it’s so important.

Beyond the Grid – Podcast
I’m a massive F1 fan and recently caught the Ross Brawn episode of the Beyond the Grid podcast. Petrolhead or not, I’d recommend this real-life fable that sees an entrepreneur build a team that ultimately becomes world champions when no one thought they ever could. The legend of BGP001 is inspiring proof that human creativity can power a car around Monaco faster than a $500M budget.

Skin in the Game
It seems every client conversation I have lately broaches the topic of transformation. It’s one thing to plot and plan ideas from the relative safety of a whiteboard, but quite another to swim against organizational waters in order to implement transformative ideas. Mindful of this, I’ve been challenging myself to find new ways to stay personally invested in these collaborations. “Never trust anyone who doesn’t have skin in the game…mistakes never come back to haunt them,” writes Nassim Nicholas Taleb in Skin in the Game, the latest volume in his provocative Incertotreatise. Players play and the rest judge from their armchairs, while Taleb – our ornery coach – prowls the sidelines, reminding us that owning risk is a daily practice in a creative life.

The Handmaid's Tale
I only got around to watching the third season of The Handmaid’s Tale this year – it isn’t new, but it resonates strongly in the post-#MeToo era. Women’s empowerment has been particularly topical this year in France, especially after stories came out about several agency bosses in Paris. But this political piece of fiction isn’t addictive just because it talks about women’s roles in a fear-based society; it also touches on several other themes, such as the influence of religions, the treatment of migrants, and widespread caution due to the troubling rise of authoritarianism – all subjects that resonate strongly today and that our field must keep our eyes open to.

Usbek & Rica
At a time when everyone is running around like headless chickens trying to ride THE wave that will reach millennials, Bonus by Usbek and Rica takes a welcome step back and considers the future with intelligence. Whether it’s an investigative piece on the French army hiring San Francisco writers to imagine the future, geopolitical fiction on the United States of Africa, decrypting GAFA cryptocurrency, or a prospective piece of the future of urbanism, their point of view is always objective, researched and often positive. It’s stimulating and inspiring – a piece of media like no other for both the creative-minded as well as the business-minded.

Call My Agent
I’m very late on this, but I highly recommend the show Call My Agent! This show takes place in a talent agency in Paris. It’s hilarious, I just loved it.

The Power of Moments
There are key moments that shape our existence. You can’t wait for them to happen – you have to make them happen. That’s what first drew me to the book The Power of Moments by Chip and Dan Heath. It covers different ideas that apply to my everyday life, like consciously creating milestones more frequently in everything we do, which allows us to assess our progress, move forward and acknowledge little victories. It’s more encouraging and motivating that way. The book also talks about being brave, which really speaks to me. Without courage as a manager, I wouldn’t be where I am today!

The Naked Director
Sun. Sand. Sex. The first two are typical summer ingredients, but that last one is all about an upcoming Netflix series, The Naked Director. This series is about the rise of adult video director Toru Muranishi, who revolutionized the pornographic industry back in the ‘80s.

Life Lessons from a Brain Surgeon – The New Science and Stories of the Brain
Life Lessons from a Brain Surgeon is basically a CrossFit session, but for your brain. This book will allow you to exercise the most important tool you were even given and allow you to either reach new heights or maintain that level for as long as possible. Let’s unplug that old treadmill and get reading!

Today’s consumers are unreasonable
We want to offer content that truly matters to you. By browsing this site, you accept the general terms of use and the use of Cookies. Learn more